100 Heartbeats: The Race to Save Earth’s Most Endangered Species - by Jeff Corwin 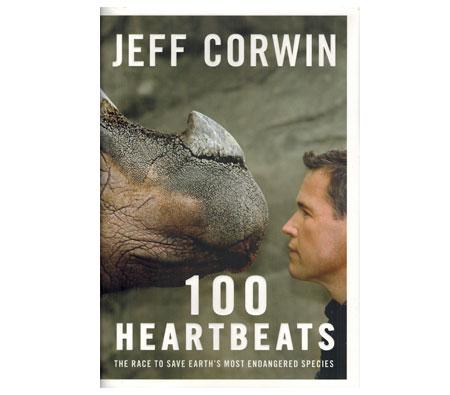 “The importance of this absorbing and exciting book is that it bears witness to Earth’s vanishing wildlife by an expert who has actually visited the species, one by one. Corwin reports their status and prognosis, their case histories and humanity's chances to save each one—if we awaken in time.”
—E.O. Wilson, research professor at Harvard University and Pulitzer Prize-winning author of On Human Nature and The Ants

“(A) forceful plea for humanity to stop the so-called ‘Sixth Extinction,’ (100 Heartbeats) stress(es) that humans are responsible for the extinction crisis, and only they have the power to stop it.”
—Columbia Journalism Review

“Biologist, Emmy Award-winning producer and TV host Corwin discusses polar and panda bears, Florida panthers and Bengal tigers, and other creatures in this valuable, far-reaching look at endangered species and global efforts to save them. He begins with recollections of a trip to ‘the ice-locked village of Kaktovik, 300 miles north of the Arctic Circle,’ where Corwin joins scientists from the U.S. Geological Survey studying polar bears, the first animals listed as endangered ‘due to climate change and the resulting shrinking of sea ice.’ Determined but far from didactic, Corwin hops the globe discussing a range of land and sea animals in immediate danger, but also the people who live among them and work for their preservation. He also highlights success stories; the California condor, for example, ‘teetered precariously at an estimated 22 birds in 1987,’ but intensive captive-breeding efforts have helped bring the population to more than 300. Proving that smart, concerted conservation can and does work, Corwin manages to dull the hopelessness and build a strong case for continuing efforts now and in the future.”
—Publishers Weekly, © Reed Business Information, a division of Reed Elsevier Inc. All rights reserved

“Drawing from his travels to the front lines of the extinction crisis, Jeff Corwin paints a compelling portrait of the many threats facing our planet’s wildlife. Alternately frightening and inspiring, 100 Heartbeats holds important lessons about the impacts we have on endangered animals and what we can do to save them.”
—Rodger Schlickeisen, former president and CEO of Defenders of Wildlife

“A riveting firsthand account of the lives of endangered animals and the stalwart efforts to secure their future. 100 Heartbeats makes the case clearly: Those present on the planet now have the responsibility, the potential and the opportunity for heroic rescue.”
—Thomas E. Lovejoy, Ph.D., biodiversity chairman and former president of the Heinz Center for Science, Economics and the Environment

“Jeff Corwin is the best nature guide I know. In his gripping new book he pulls us into the life-and-death struggle to save the world’s most endangered species. Rather than a collection of obituaries for endangered species, 100 Heartbeats illustrates how committed individuals and conservation organizations can prevent extinctions. This engaging mix of adventure, compassion for nature, and solid natural history is a perfect introduction to a world we are about to lose unless we act now.”
—Dr. Eric Dinerstein, lead scientist of the World Wildlife Fund